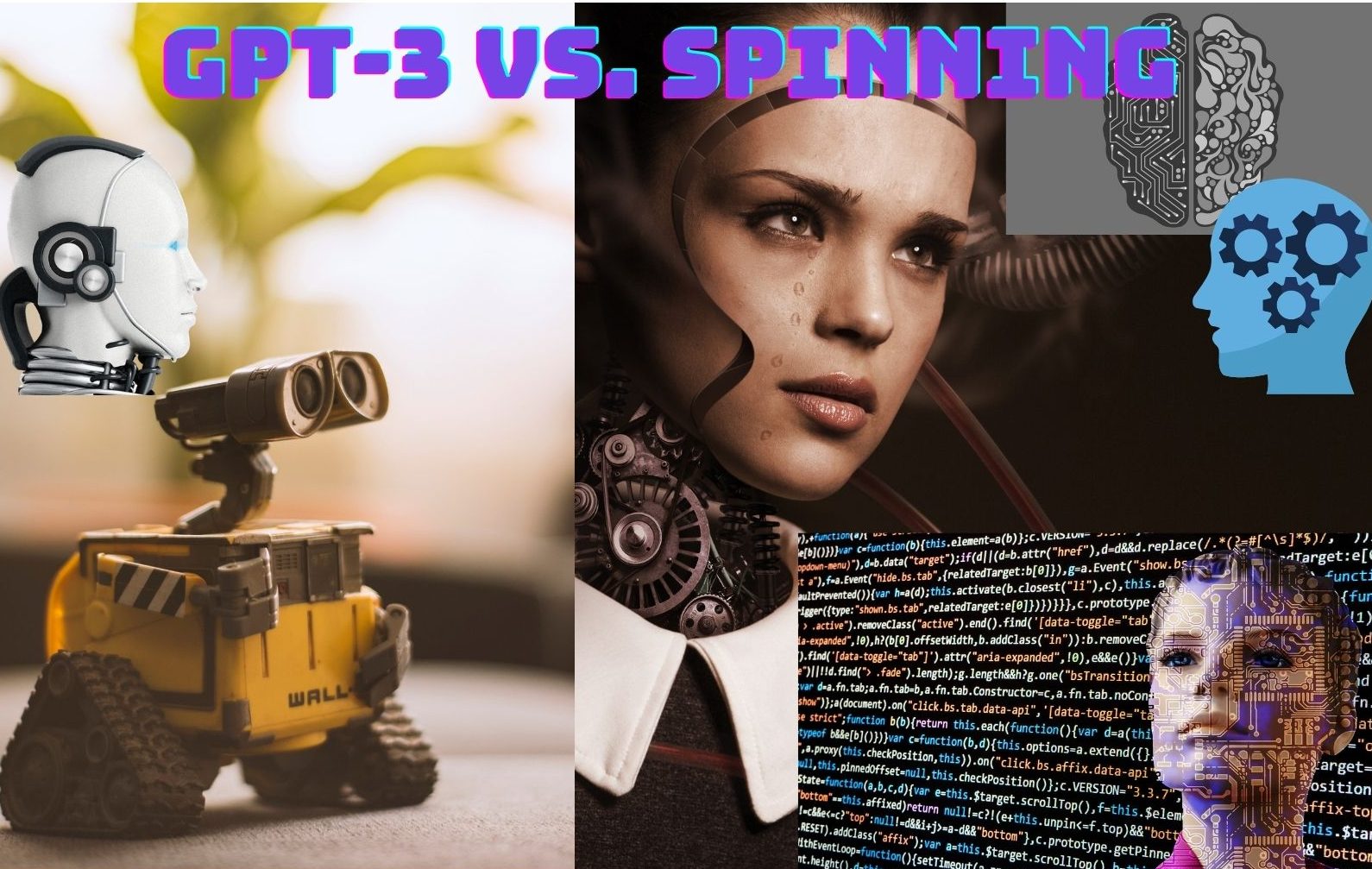 Marketers are always seeking automation tools to make their jobs easier. When it comes to creating content such as articles, blog posts, and web pages, there are many tools available. One popular technique is known as article spinning. However, as technology progresses, new and more powerful AI-based text-generating programs are emerging. GPT-3 is the latest generation of such tools.

Article spinning has been used to create unique content using an earlier piece as a model. This, however, is quite limited. Now a new type of artificial intelligence application, GPT-3, is emerging as a more sophisticated alternative. Let’s look at what article spinning actually is and how GPT-3 compares to it.

What is Article Spinning?

Spinning an article means rewriting it so that it’s not flagged as duplicate content. Article spinning can be done manually or with software. When you spin an article, you’re often aiming to achieve a certain percentage of uniqueness, which can be measured using various tools. Plagiarism detectors are readily available online, and some are free. Copyscape is considered to be the leader in this niche.

Yesterday, I went to the store to buy milk and a dozen eggs.

I bought a dozen eggs and milk at the store yesterday.

The business grew by 100% over a five-year period.

In its first 5 years, the company’s revenue doubled.

In longer pieces, spinning can also mean changing the order of points or paragraphs. Spinning content usually works best for simple material and when there is a wide choice of substitutes for words and order.

Spinning can be tricky when there’s important information that can’t be changed. For example, it’s difficult to spin technical descriptions, manuals, recipes, and other content with facts or words essential to the meaning. In a recipe or instruction manual, you also can’t change the order.

There are numerous automated spinning products available. Free article spinners are fairly primitive and often result in nonsense. More advanced spinners can create at least readable articles and other content. Some spinners can create multiple versions of an article. Two popular tools that automate this process are Spin Rewriter and Chimp Rewriter.

Marketers usually use article spinning for SEO purposes to get multiple unique versions of something online for Google to index. Spinning is not usually used when higher-level content is needed. For example, a large brand trying to build credibility wouldn’t use spun articles on its website.

Artificial intelligence or AI has been getting more sophisticated in recent years. Chatbots and voice assistants (such as Alexa and Siri) are well-known examples. However, until recently, even the most advanced AI tools couldn’t produce written content from scratch that was comparable to human-generated content. Most people can easily tell the difference between talking to a chatbot as opposed to a live person. GPT-3 may be changing this.

GPT-3 is a text-generating AI application created by OpenAI, an organization started by Elon Musk and other AI enthusiasts. It’s the latest generation, following GPT-1 and GPT-2, of an AI that can create text that is often hard to distinguish from that written by humans.

GPT-3 has been described as the first AI that can pass the Turing Test. This is an old idea in computer science, based on the work of computer programming pioneer Alan Turing. Turing originally came up with the idea of the Imitation Game, which tested a computer’s ability to mimic a human so that other humans were fooled.

The idea of computers or AI robots being able to fool humans has been explored in numerous science fiction TV shows and movies. Until now, however, it was rare for AI to come close to passing the Turing Test.

GPT-3 has several characteristics that separate it from article spinners and earlier AI tools.

GPT-3 isn’t perfect, and the technology is still developing. There are still glitches that make it risky to use for professional purposes, especially if someone uses AI-generated text without proofreading. GPT-3 and other advanced AI have, for example, produced offensive text with racist and vulgar words. Since AI, no matter how advanced, can’t think for itself, it relies on existing content for research. So it may pick up on popular prejudices or misconceptions found on the internet.

Considering how quickly GPT applications have evolved, however, it’s likely that it won’t be too long before it becomes even more human-like and problems are overcome. For example, developers may figure out how to teach AI to tap into more reliable information and avoid content that’s false or offensive.

Even as GPT-3 gets more refined and humanlike, however, glitches may still occur. Thus, humans who use AI for content will, at least for the foreseeable future, need to proofread and possibly edit the results.

Unlike article spinners and less sophisticated AI applications, it’s not easy to access GPT-3 software. OpenAI, the nonprofit that’s working on the project, is restricting its use. They want to make sure that it’s ready for wider use and will not be misused. They have already released beta versions to some companies, which means a few products on the market are incorporating GPT-3 technology. A popular example is Copy.ai.

As technology advances, we can expect more AI applications to enter the marketplace. While OpenAI is, so far, restricting the use of GPT-3, others may devise AI with similar capacities. If a commercial company develops it, we could see it widely used. OpenAI, meanwhile, is gradually making the technology available to more people. Either way, within a few years, we can expect a world where AI can quickly produce human-level content for many purposes.

What can we conclude from this, and how does it relate to automated content, article spinning, and possibly using GPT-3 and other AI in the future?

Over the next few years, we can expect to see businesses relying more and more on AI-based tools. These will be costly at first, which means they’ll be used mainly by larger businesses. As with other technologies, however, the price will gradually come down.

There’s little doubt that AI and, in particular, GPT-3 will have a great impact on content creation in the coming years. It remains to be seen how widely used they will be and what kind of challenges and unwanted issues may accompany them. For example, if an AI spreads false information about someone, the person or businesses using it could be liable for legal or civil damages. GPT-3 and other text-based AI tools have a certain learning curve. To get the best results, users will have to provide the right prompts. There’s also a danger to relying too much on any technology. The content will have to be carefully proofread and edited if glitches or unwanted material are created. As with any technology, people will ultimately have to take responsibility for making the best use of GPT-3.